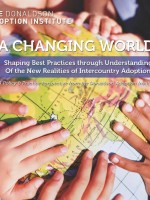 “A Changing World” represents the most extensive independent research into intercountry adoption to date, including into the regulatory framework/treaty called the Hague Convention on Intercountry Adoption (HCIA). The research – funded by the American Ireland Fund and the Adoption Institute – was conducted over the past two years by scholars at Tufts University and the Institute; among its components are surveys of about 1,500 adoptive parents, adoption professionals in the U.S. and other “receiving” countries and countries of origin, as well as interviews with senior policymakers in 19 nations.